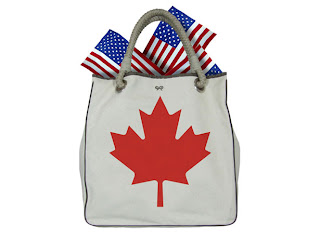 Growing up in Ontario we grew use to the idea of being able to hop over the border and into the USA for some “cross border shopping”.  The advantages?  Well right now the CD is worth a bit more, or at least equal to the USD.  Also, for reasons related to population density the selection is better.  So we came back with a couple of bargains.  Even Mom pulled her parcels out of the car on the Canadian side with a big smile.  Ah – bargains!

So what did I get? It would seem I got to pay.

Living in Alberta where the nearest US city would be 6.5 hours away, the idea of cross border shopping would require a weekend and hotel rooms.  Not so much of a deal – maybe you could get me there based on adventure….if shopping is unadventurous.

Even as we drove today we were talking about the economic effect of all the Canadians – and there were more than a few – taking their hard earned money to the USA.  That took us to the tangent of air travel and the significant taxes of travelling from Canadian Cities.  For those of us in AB it isn’t going to be something we have much of a choice about.  However for those living near the border where a large American City sits compare the costs – you’ll be hard pressed to figure out WHY you shouldn’t fly out of the USA.  Taxes on a Canadian flight can be $100 vs $12 for the US flight.

Should we paying more and keeping the Canadian economy going – or saving our cash and taking advantage of the lower price?